Our initial shopping day was Monday last week, and we needed to make dinner…  After returning home from the grocery store, we dove right into cooking. We had worked up quite the appetite after our dance through Ralphs.

As soon as we cascaded through our front door I asked Kaia to turn on the oven. I grabbed the Vitamix – this is an incredible machine. It’s like a bullet blender, but a thousand times better.

We have an electric stove and oven that, for some reason, doesn’t hold the temp or remain consistent throughout cooking. I think it has less to do with the oven, and possibly more to do with Kaia opening the oven door every 30 seconds while something is cooking. I’m guessing your kids have that same heightened anticipation while waiting for the object in the oven to become edible! I almost didn’t sign our lease due to the electric oven/stove conundrum, but alas here we were, and I had asked Kaia to turn the oven to a higher temp than necessary so it would cook properly.

I was thinking chips and salsa, some rice and our tri-tip on the fly! As I mentioned, we were so hungry by the time we started cooking. Kaia and I talked it over and she concurred. This would be the fastest way we could feed our hungry faces.

With the oven heating and the Vitamix out, we grabbed our ingredients…

**The above are things we purchased this week, the below are items we already had at home…  Remember we try to always work with what we’ve got! 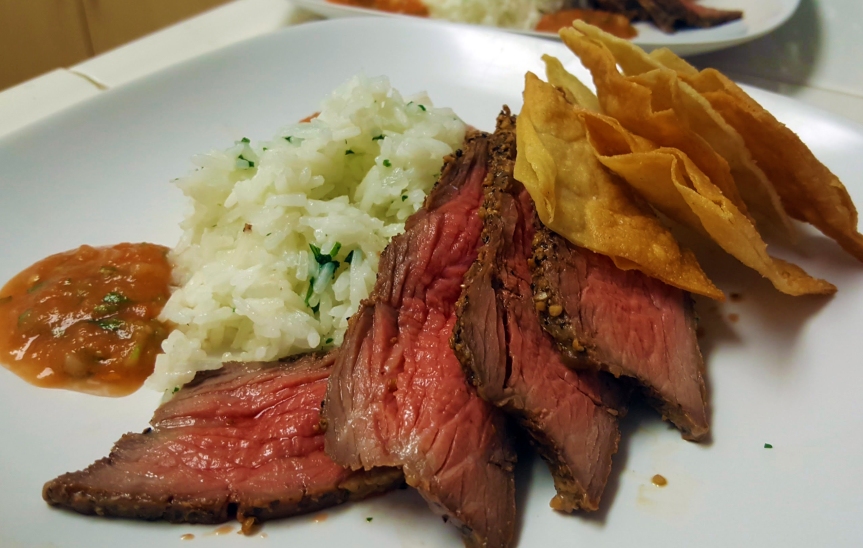 Fast-forward to Wednesday and three meals were already consumed. Kaia and I made our way across town to her Godfather’s place. His name is Miki (pronounced like Mickey Mouse) and coincidentally he is also my bestie. He’s an amazing guy with an incredible family of his own. He has 2 kids under the age of 2, and a very patient fiancé. His brother, whom is also one of my dear friends, happened to be babysitting a 6 year-old named Max.

So our count was a little higher than usual…. we were up to 4 adults, 1 pre-teen, 1 first grader, 1 toddler, and an infant… by my count that’s a 7.5-er on the food-consumption-o-meter. Our group epitomizes the modern families that we see grace the small screen today. Every one of our stories is different, but those differences are what make us all alike. Miki is a camera operator and photographer. We had set up this date to shoot some food photos.

As our time together sometimes does, our evening turned into a family dinner for everyone. Kaia and I still had a number of our veggies from the initial purchase this week. Those coupled with some other things around our house from weeks prior made for a great shoot (for this blog!). After we talked about what Kaia and I could bring, Kila, Miki’s brother, decided to pick up some protein. A whole chicken and 2 extra chicken breasts were bought and paid for and BOOM! We had a well-rounded dinner planned and ready to be enjoyed by our families.

First shots were of some very pretty veggies: 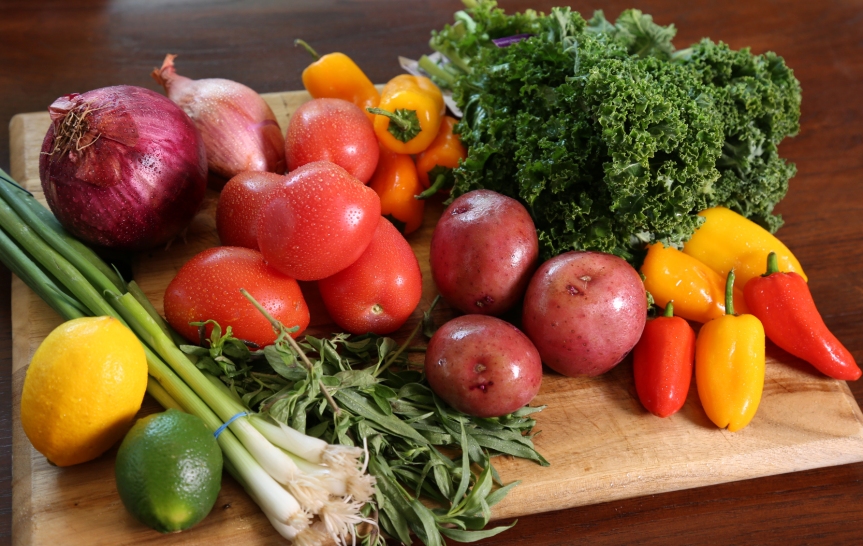 Generally with these impromptu family dinners we fly by the seat of our pants; spontaneity sprinkled with love become our main ingredients. Kaia and I took a look at what we had.

We knew that the kale needed to be eaten, as well as some of the potatoes. Both Kaia and I said HASH! …slow down pot-heads, we are talking potato hash! We used a cast- iron skillet to cook the diced potatoes and small chopped kale. The first thing we did was use olive oil on a paper towel to grease the pan. We added some brunoised shallots to sweat in the pan. Then we added our potatoes, followed later by the kale. The kids kept asking for more. They ate all of it! 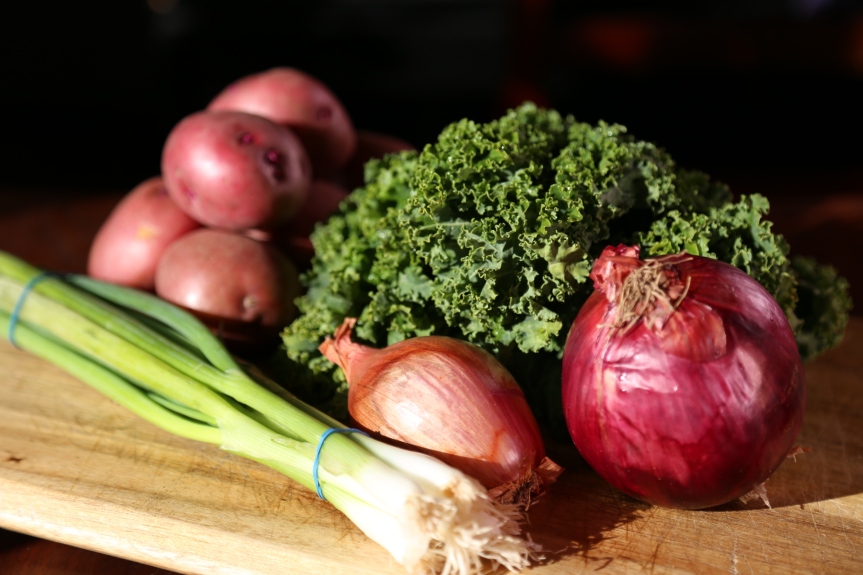 As parents, we know how difficult the “eat your veggies” conversation can sometimes be. If you are looking for something delicious to feed the kiddos, this potato hash is your jam!

Next we utilized the dehydrated spring mushrooms by adding about 2 cup of veggie stock to a small pot with the mushrooms. These would become the base for a mushroom cream sauce. We let these rehydrate while we broke down the whole chicken. 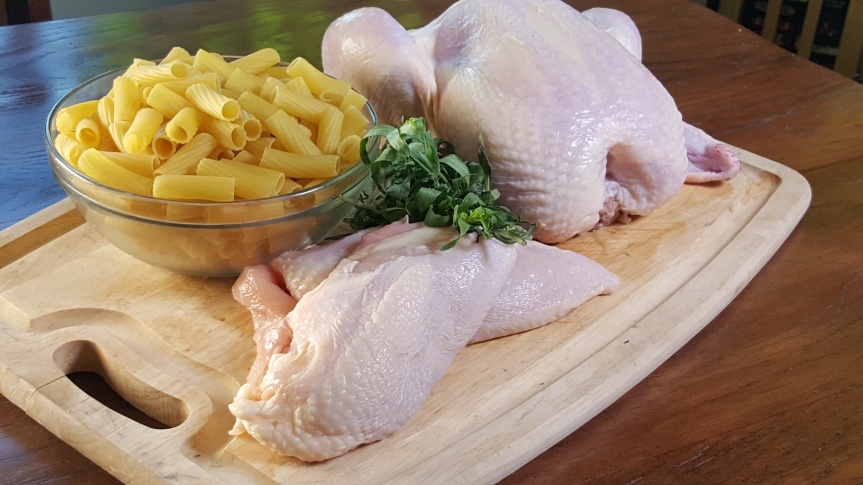 Finally we got to the chicken in its now broken down state. The smaller pieces make it easier (and quicker) to cook: 8 pieces, plus the 2 additional breasts Kila brought along with the whole chicken. We preheated the oven to 400 degrees (not our oven, so this is the real cooking temp). The potato hash was removed from the cast-iron. This not only gave us a pan to cook on, but one that already had some great flavor already on it. That’s what we call a win-win! 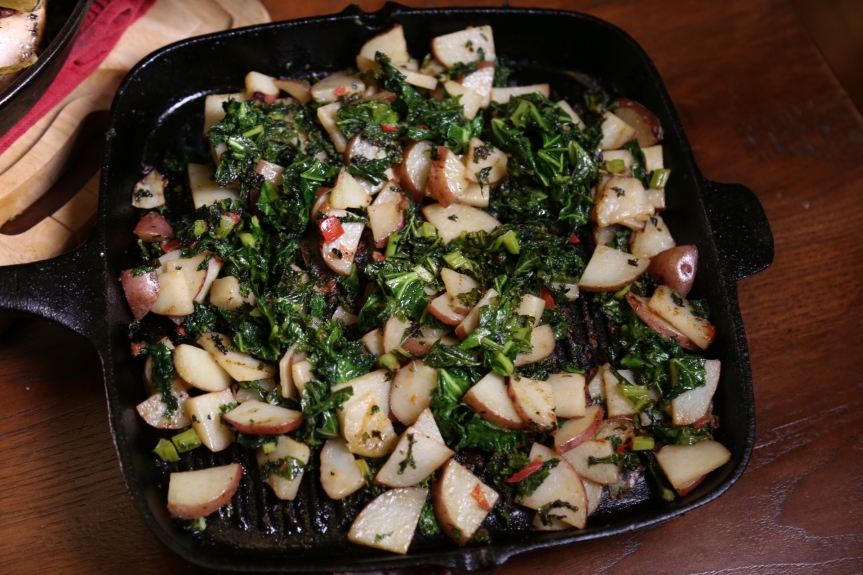 Our goal was to blacken the chicken with the skin still on. Kaia used a mortar (grinder) to create a powerful rub. After searing the chicken skin down for about 5 minutes we placed the skillets in the already pre-heated oven. Toss some of the green onions on the top of the chicken before putting them in the oven for added plate filler and flavor. 20 minutes in the oven is ample time for the chicken to cook through. 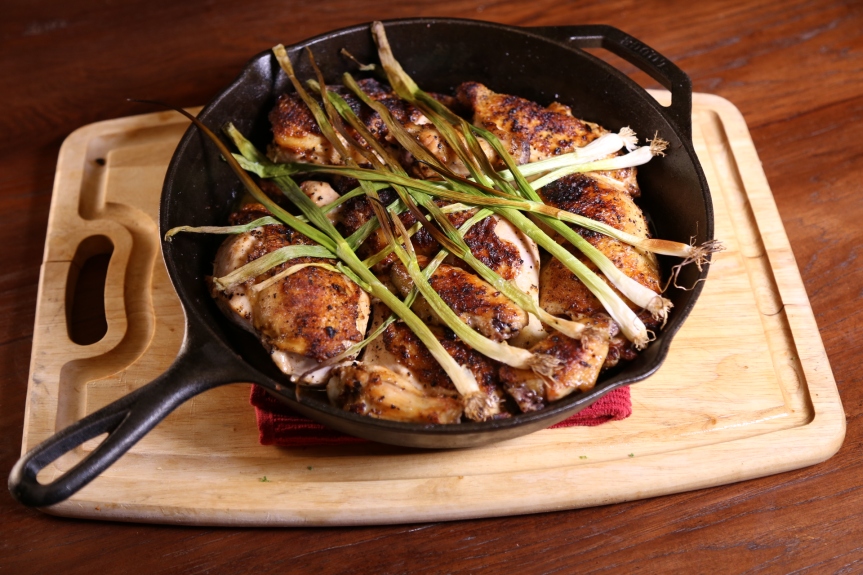 It sometimes seems that the importance previously placed on family meals and time spent together has almost completely disappeared. At least that’s how it feels these days – insert sad face.

Daddy Daughter Cooking wants to help remind everyone about the importance of family socials. The cooking bonds that were once forged by trips to Grandma’s or by going to Mom and Dad’s for Sunday dinner is seemingly a lost art. We need these interactions. For Kaia and I this time spent together and memories that we continue to make are shaping our future.

Thanks to all for sticking around and following us on our journey. We hope that these recipes strike a chord with you!

We are a Daddy and Daughter duo cooking through life together. We welcome you to share in our kitchen adventures as we grow together through open communication and learning. As a Daddy and Daughter combo, we know that the only two requirements for your success are: The willingness to spend time together and a little planning at the grocery store.